Last week’s Sportscene was an entertaining affair, and not just because it didn’t feature Dundee losing for once.

Midfielder-turned-contrarian Michael Stewart completely lost his shit over the issue of penalties, the cause of his ire being a spot kick awarded to Rangers, one not awarded to Motherwell, the one St Mirren got against us, and several other claims the Buddies made. One from the latter category in particular had the ex-Hearts man fulminating as he went out of his way to disagree with the more conventional opinions of Jonathan Sutherland and Steven Thompson, a man Mikey is in danger of being smirked to death by. 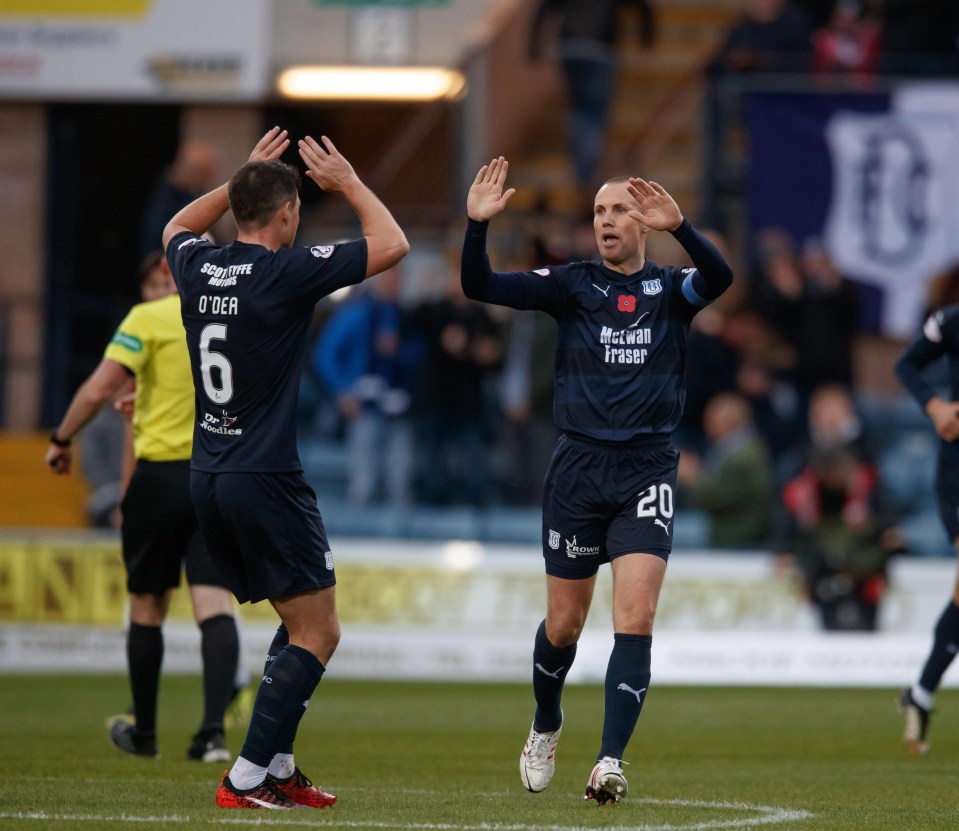 The soft penalty that Simeon Jackson won for St Mirren is just one of several decisions that Dundee, shite as we’ve been, are justified in bemoaning of late. While Jordan Jones was retrospectively punished for his dive at Dens last month, Mikael Lustig’s keenness to hit the deck has passed with barely any mention, while Sportscene didn’t see fit to show the Dark Blues’ own claim from the St Mirren game, or any of the three from the week before at Motherwell.

The subsequent conspiracies about the West Coast bias of the SPFL/BBS Scotland got me thinking about the penalty masters, misses, decisions and debacles from my time following Dundee.

If football was more like its younger American cousin, Ryan ‘Special Teams’ Conroy might be regarded as an all-time greats. Eleven of Conroy’s 25 goals for Dundee came from the spot, a 100% record (so far as I can remember) that probably (I haven’t fully researched this TBH) makes him our most successful player from 12 yards out since the days of Andy Penman, the Penalty King himself. His record also laughs in the face of claims that left-footed players can’t take penalties.

From safety to where

When Matt Lockwood rocked up at Dens, Google informed us that he was a renowned penalty expert. Cucumber-cool Lockwood duly lived up to this rep before developing the type of yips that Eric Bristow whenever experienced when approaching the oche. Three pens were missed in just a few weeks, the last of which contributed to a Scottish Cup exit at the hands of Kilmarnock.

The only penalty shoot-out to determine the winner (as opposed to the destination of a bonus point) of a Dundee derby took place at Tannadice in September 1995. Neil Duffy turned out for United shortly after crossing to the wrong end of the street, but it was 38-year-old Billy Thomson and 34-year-old Iain Ferguson who put one over their old club while defying the curfew set by their nursing home. Thomson saved spot kicks from Gary McSwegan and Owen Coyle while Ferguson, who had been brought on in the dying seconds purely to take a penalty, put the ball past Ally Maxwell with his only touch of the evening. Dundee were through to a League Cup quarter final against Aberdeen and Fergie was allowed out the ‘Judas Bastard’ corner.

It seems strange now when games are shifted all the time to suit the dozens of companies who own the rights to broadcast Scottish football, but Dundee’s first home game to be screened live didn’t take place until 1992. The occasion was a Scottish Cup 4th round reply and Falkirk were the visitors. Bairns defenders Crawford Baptie and Forbes Johnston repeatedly assaulted Billy Dodds in the box only for referee David Syme to wave play on each time. Oh, and Falkirk scored the only goal right at the start of a 2nd half that kicked off so early that Sky were still on their ad break when the ball hit the net.

Confess your guilty Scottish football secret. Mine is that I would have welcomed Dougie Imrie to Dundee many times over the years, despite his growing role of pantomime villain following a fracas or two with our players, management and supporters. He was always a thorn in our side in a footballing sense as well so when he stepped up to take an 87th minute penalty that would have left Dundee in serious relegation trouble at the tail-end of last season we all feared the worst. But his penalty was shite! Parish saved, Dundee were as good as safe and the Derry went wild.

Billy Dodds again. A relegation battle again. Despite boasting a strike force of Dodds and Keith Wright, Dundee sat five points behind 2nd bottom St Mirren when the Buddies visited Dens with just four games of 1989/90 remaining. The League-winning side were brought out before the game to rally the crowd and Dundee came roaring out of the blocks with Alan Campbell opening the scoring in the first minute and the Dark Blues being awarded a penalty shortly afterwards. Dodds, who had already converted three spot kicks that season, stepped up but failed to make it 2-0. A young George Shaw equalised for St Mirren and a 2nd half winner meant we were absolutely fucked.

You Trip Me Up

The sound of Dumbarton players and the small band of travelling supporters screaming for a penalty was drowned out by 10,000 sharp intakes of breath. Hamilton were beating Morton 10-2, cancelling out our seemingly unassailable advantage in goal difference, so a Dumbarton equaliser would leave Dundee broken. Kyle Benedictus brought down Sons striker Chris Kane and the whole stadium turned to referee Bobby Madden. The blind bastard waved play on! We somehow saw out the remainder of the game and the Fundesliga title was ours.

This Is How It Feels To Be Lonely

If you have the chance to stretch your lead at the top of the league by pulling out all the stops to ensure your game against the bottom side goes ahead while your rivals sit idle you take it, don’t you? Well, in hindsight we wouldn’t. After switching the New Year 2010 fixture from a frozen New Broomfield to Dens, Dundee managed to reach peak Dundee by losing a game we couldn’t lose. Leigh Griffiths missed a 1st half penalty before Airdrie scored one of their own and Gary MacKenzie was sent off. By the time a game that should have taken place at Dens was played at Airdrie, our form was all over the place. We lost 3-0, Jocky Scott was sacked, Gordon Chisholm failed to arrest our decline, Inverness won the league with games to spare and Dundee were in administration within months.

Look Back In Anger

That you don’t get penalties against Rangers is a truth universally known. Except that you very occasionally do, and, in these circumstances, you have to make the most of such opportunities. What you don’t do is miss two in the same game. Which is what Juan Sara did in a match completely dominated by Dundee yet won by Rangers when Bert fucking Konterman scored the only goal of the game.

The same glitch in the matrix that results in two penalties being awarded against Rangers in the same game can also throw up last-minute spot kicks against Celtic. 1998/99 started slowly for Dundee (though in relative terms it was an Andy Kiwomya to this year’s Jim Lauchlan) with league defeats to Aberdeen, Dunfermline and St Johnstone as well as a League Cup humiliation at home to Alloa. What you don’t want in such circumstances is to be playing the champions next but a spirited performance against Celtic was eventually rewarded in the 90th minute. Having turned a blind eye to Stephane Mahe booting Brian Irvine in the pus in the box, the ref was perhaps feeling guilty when bald-as-a-coote Enrico Annoni, jealous of Eddie Annand’s blonde streaks, tripped the striker on the 18-yard line. Following a run-up that seemed to start at the Myrekirk Circle, Fast Eddie sent the resulting penalty into the net to claim a point for the Dark Blues. A season that would eventually see us finish 5th was finally up and running.

Of course, even when good fortune presents itself in the form of a free shot at goal from 12 yards out, you have to make the most of it. The fact we’ve been awarded two penalties this season and failed to score either aptly sums up our lack of goal threat. Given the way the season has gone subsequently, the likely two-horse race for 11th place and the fate of the man who brought him to the club, Sofian Moussa’s opening day miss at Paisley might yet prove as costly as any duffed penalty we’ve seen yet.

In a desperate bid to get the goals flowing might just be time to lobby FIFA to introduce specialist penalty takers and launch an audacious bid to bring Ryan Conroy back from Airdrie in January.